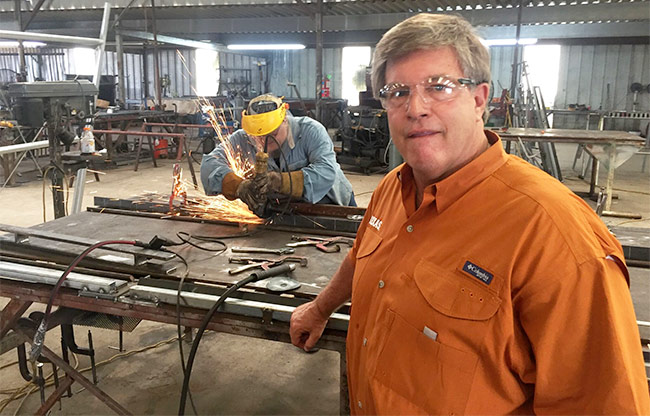 Bill McKean is a man on a mission, a fact that was evident to me in the first five minutes after sitting down with him at Jack Allen’s Kitchen on Anderson Lane. Born in a small steel town in Ohio where neighbors knew one another by first name and front doors were never locked, Bill is a no-nonsense, warm, talkative man with a solid, small town Catholic upbringing. His father was Senior Vice President of the Miners and Mechanics Bank in Steubenville and, like the George Bailey character from It’s a Wonderful Life, lives to this day, a humble unpretentious life.

Bill is descended from some tough, hard-working and accomplished ancestors including one Thomas McKean, a signer of the Declaration of Independence and Governor of both Pennsylvania and Delaware. And then there was his great-grandfather Mike “Dynamite Mike” Cleary, an explosives expert who helped to build, among other things the Panama Canal and was credited with taking quick action during the great Johnstown Flood, saving countless lives.

Bill’s father, Bill Sr., now retired at age 84, is a gracious, plain spoken man whose character is surely a product of the Great Depression and his time serving in the US Marine Corps. He worked long hours at the bank but managed to spend important time with Bill and his two brothers and one sister. Much of Bill’s foundation today is rooted in the stories and life lessons shared by his mother and father. His mother Carolyn was the youngest of 13 Irish children and helped direct Bill’s relentless energy and mindset to “always give your best effort.”

A Character Forged in Steel

Steubenville was a great American steel town. Every family had someone or knew someone that worked in the steel industry. Bill’s grandfather, Cornelius McKean worked in management with Wheeling-Pittsburgh Steel and so Bill was exposed throughout his early years to a solid work ethic, much of it founded in steel. Bill’s father in law, Joe Giovannone also worked with Wheeling-Pittsburgh Steel on rail cars for 44 years before retiring. 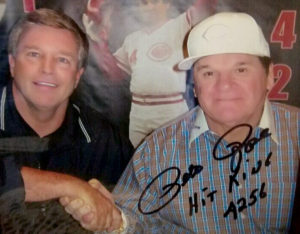 One of his earliest memories was going to meet his baseball hero Pete Rose at the age of six. He recalls the experience vividly of walking up to a table where Rose sat and seemed so very large. Rose put his arm around young Bill and signed his autograph. Pete Rose was a big deal in those days and this meeting left a lasting impression that contributed to Bill’s love of baseball.

On a snowy mid-winter morning, a sleepy-eyed 10-year-old Bill McKean pulled his trousers on and prepared for his cold bicycle ride through darkened neighborhoods delivering the Steubenville Herald Star to his 77 customers. It was 5 a.m. and Bill’s father also awoke to walk behind Bill Jr as he delivered his papers. As he cranked past a small, unremarkable and fully pitch-dark home on Lincoln Blvd, Bill wound up and hurled the heavy paper some 25 feet with impressive accuracy, onto the front porch. He prepared to start peddling when a familiar voice echoed out of the darkness, “Bill, what are you doing?”

“Delivering the paper,” Bill responded with confidence to his father.

“Bill,” his father responded, “Mrs. Noonan is going to come out and slip and break her neck walking across the snow on her porch to get that paper.” Bill knew he was right and promptly got off his bike, walked up and placed the paper on the front stoop by the door where it could easily be picked up without stepping onto the ice and snow-covered porch.

Bill played baseball while attending Steubenville Catholic Central high. As a shortstop, he proudly wore jersey #14 (as did Pete Rose) and earned the nickname “Fireball Billy McKean” from the late coach John Nese, who mentored Bill on the field. Bill went on to Jefferson Technical College to study electronics and play baseball until the time Coach Nese had the conversation all young ball players dread. “Bill,” Coach Nese explained, “you just don’t have the speed you would need to make a career in baseball.” These were tough words for Bill to hear but he listened to his coach’s sage advice and decided to put his focus elsewhere and learn to work in a different direction. Coach Nese instilled in Bill the lesson of winning humbly and losing with grace, but never to accept losing. He briefly considered a career in coaching but wasn’t sure he could make a sufficient living at it so he moved to Austin and accepted an engineering technician opportunity with Motorola to start a new life.

The Road to Motorola

Bill’s career path in semiconductors watched him growing through the Leadership ranks quickly. He moved to Richmond, Virginia to work in a start-up for Motorola, White Oak Semiconductor, where he spent 4 years as the Senior Director of Manufacturing. From there, Bill found his way back home to Motorola Austin where his ability to create and leverage synergies while optimizing production performance and efficiencies blossomed and matured. Bill served as Vice President of Global Manufacturing and External Manufacturing where he was responsible for manufacturing facilities over several years. He would complete his career as Vice President and Chief Procurement Officer at Freescale Semiconductor (Motorola spin off) where he spent much of his time visiting the company’s global site operations and over 8,000 vendors.

During these years Bill loved to travel. He was particularly fond of Singapore and had the remarkable experience of observing, first hand, the emergence of women in the workforce in China’s fast evolving tech industry. “When I first began hiring and training folks for our China facility,” explains Bill, “there were hardly any women at all and those that did apply would barely speak or even raise their heads up. In just a few years, our new hires were almost half female and they were standing up, raising their hands and asking tough questions and speaking out. It was inspiring to see that transformation take place in a country where women could actually get into trouble if they were caught using a computer or searching the internet for knowledge.” Bill asked one of the bright young women how they learned to work with technology without the benefit of having access to computers and she confided in a very hushed tone that they would befriend the staff at the western hotels where visitors to China stayed, and be allowed to access computers in the lobby areas. “The thirst for knowledge is powerful and will not be prevented by any entity, including Governments,” Bill noted.

While exciting and fulfilling, the demands of corporate travel and time away from home where Bill has a wife and kids that were growing up fast, had begun to wear on Bill. After much consideration he made the decision to retire after 33 years with the same company. His family and friends thought it was a great idea and encouraged him to make the move. But Bill was skeptical. At first, retirement felt good. It was nice to just relax on the porch and watch the sky turn colors. With a little spare time on his hands and to help keep busy and occupy his time while he decided his next move in life, Bill went down to the McCombs School of Business at the University of Texas, where he used to visit and speak to young Procurement and Supply Chain students, enrolled in and completed their extensive Executive Education Program in General Management. The experience re-invigorated his desire to “be in the game.”

Only six months into retirement, Bill McKean wasn’t ready to call it quits, and began searching for the next thing. That next thing turned out to be Metalink, a fencing supply, fabrication and installation company with deep roots in Austin. Bill studied the company with his friend and business partner Dirk Wristers and gained an appreciation for the people and potential of the company. Bill was also intrigued with the idea of working with American steel. Bill McKean had come full circle and it was in a sense, a kind of homecoming for him, one that seemed to come along at the right time of life for him in many ways.

Bill went to work learning the business and familiarizing himself with the products and customers that his employees served. All the while relishing those fond moments of stories around the family dinner table —stories about steel manufacturing and the people that made the steel Americans could see on city streets and in the cars they drove, the bridges that spanned the great rivers and bays from New York to Chicago, to Houston and San Francisco, in the shadow of vast gleaming towers of steel. Steel that built this Country we all call home. 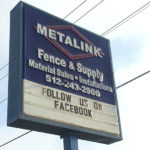 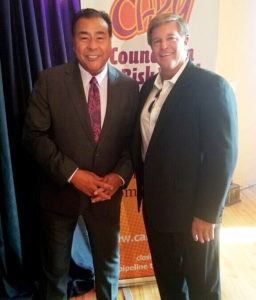 As President at Metalink, Bill is proud to be delivering American made steel to his customers. As a member of the Austin Business community, Bill is Vice Chairman at CARY, a local non-profit that mentors and provides life skills to young people at risk to help them get on the right track in life. He follows a special calling to help young people get off the fence and pursue their dreams along a well-lighted path in life. When I asked what gets Bill McKean up every morning, he responded without hesitation, “knowing that I can make a difference in the lives of others, especially the people that make Metalink a great company founded on core values around integrity, and driven by a deep respect for our employees — that gets me up every day — Making a difference.” In a sense, Bill is coaching and has been coaching across most of his professional career, where he may have found his true calling in coaching business versus the sports arena. “The similarities are endless,” notes Bill.

Although the hours of business ownership can be long, Bill who is also a partner with Jack Gilmore and Tom Kamm of Jack Allen’s Kitchens and Salt Traders Coastal Cooking seafood restaurants, still manages to make plenty of time for his wife Vickie of 36 years and their two sons. He often talks with his dad, who recently told Bill that he didn’t need to fix his air conditioning in his aging car because “summer is just about over and the nights are getting cooler.” While “Fireball Billy McKean’s” trophies from his days on the baseball field are packed away, the fire of competition in his belly and warm memories are not. Today, The Jimmy Stewart classic, It’s a Wonderful Life, is an annual Christmas favorite in the McKean household. As depicted in the movie, the joy of serving others and the sense of pride in lifting people up has been passed along to Bill through many generations in his family. 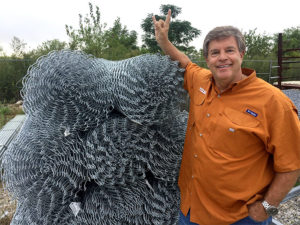 Bill’s vision for Metalink is to provide a quality American made product crafted with pride. Insuring that customers are delighted with the company products, and that our employee pride and quality workmanship comes through in what we do every day. Life has truly come full circle for Bill, who grew up in our nation’s rust belt, a true melting pot made up of people from all ethnic and social classes. He was taught the value of a strong work ethic at an early age, the value of being honest, doing the right thing and respecting everyone. These are the gifts that were handed down to Bill. He smiles when he mentions that, “I probably have many ancestors looking down on me from above and smiling as they watch me working in the steel and iron industry,” which makes him very proud. “These are my roots and they have grown deep and strong in me,” says Bill. “That is what I want Metalink to become — a strong company with deep roots that will serve our employees and customers for years to come.”