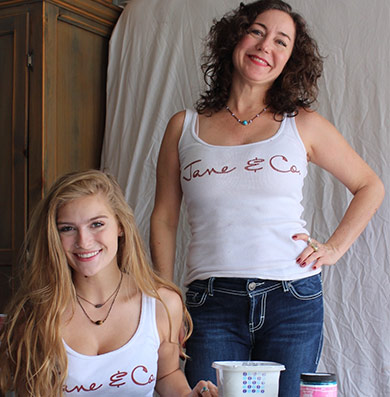 Back in 2004, Jane Jennings moved to Austin with her three children, two girls and a boy. She took on various jobs to make a living; cleaning houses, waiting tables, and substitute teaching. In the meantime, she explored her love for paint and color and design, painting in her house multiple times.

One of her housecleaning clients was getting her home ready to go on the market, and she asked Jane if she knew anyone who could paint the interior. Jane and a friend set up a DBA and started a company, and she found an additional painter with a great deal of experience via Craig’s List.

Several years later, Jane started experiencing pain in her rotator cuff and realized she was injuring it over and over again with the motion painting required. She sought help from a chiropractor and acupuncturist to heal; in the meantime, she says she “got smart” and hired more people to do the physical work and she could move into a managerial and consulting role.

Jane’s company, Jane & Co., found a home on Angie’s List, the online resource for home services, and Jane started paying for advertising on the site.

“I’m one of the number-one painting companies on Angie’s list and have an A rating,” Jane says. “That’s how I get most of my business.”

In her 40s, Jane has energy to spare and finds sanity in her busy life by taking care of herself. Her business is growing and thriving, and it’s important to keep stress at bay.

“I’m a believer in keeping a healthy body, and I set my life around self-care,” Jane says. “If I can’t be well and healthy and have energy, I can’t do what I need to do. That’s a big part of my life on a daily basis.”

She says her mom, now 75, is a go getter with a positive attitude and believes nothing is impossible. She remembers standing in line with all four of her siblings, purchasing chickens when they were on sale at the grocery store.

“From her, I learned to be savvy when things were on sale and stock up,” Jane says.

She also believes in bartering and finds it to be a great way for her to get what she needs.

“Once I painted a whole entryway on scaffolding and bartered with a guy who installed tile in my house in exchange,” she says. “If you’re open to helping, your generosity comes back to you.”

Her kids are learning by example; they watch and listen as Jane pursues her dream.

“In the early years, I didn’t have any extra money; I just worked and paid bills. I was barely getting by,” she says. “Growing up with a single mom, my kids saw how I had to save money in all kinds of ways. Now, I tell my kids to pursue something you love, even if it’s a saturated market. Make it happen.”

Jane says she believes in abundance, and when business is slow, she starts hustling.

“In my life, I try to create an atmosphere of abundance,” she says. “If not a lot of money is coming in, I pay the minimum of what I have to pay on bills to get by, and meanwhile, I am working hard and being open to what’s coming in. And when clients are really in a hurry and in a bind, I jump on it and try to make things happen for them.”

In this phase of her life, Jane is ready to travel, and wants to save money for her future. Now that business is picking up, it’s her goal to put a percentage of her revenue aside and she feels great that she is in the position to do that.

“I loved color and paint and it turned into a business out of something I love to do,” she says. “I still love it. Pursue first and foremost something you love and go after it. That motivates you to get up every day.”