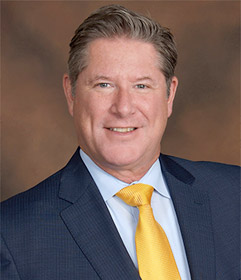 Ron Smith is a true Texan, through and through. Raised in Alvarado Texas, south of the Dallas/Ft. Worth Metroplex, Ron’s first exposure to the world of finance was through the beloved Cow Pasture Bank, a popular community bank that even had a grass runway behind the bank where ranchers and farmers could land their planes to do their banking.

Ranching and farming however, were not in Ron’s plan for the future he intended. Instead, he studied Finance and Economics at the University of Maryland. Ron soon became interested in seeing more of the world and decided to join the US Marine Corps where, in 1993, he completed his BS degree in Finance and Economics at the University of Maryland’s Asia division while stationed in Okinawa and later, Iwakuni, Japan where the famous Kintai Bridge is located. During his time there he studied under professors from all over the world including Generals that were teaching History.

While serving in the Marine Corps Reserves from 1993 through 1995, Ron joined Ameriprise, where he began his career as a financial advisor. During his more than 20 years with Ameriprise, Ron administered assets in excess of $70 million and advised clients on every aspect of their financial management guiding them through both growth economies and periods of economic uncertainty while producing a solid track record of positive growth along the way.

In 2014 Ron sold his Ameriprise portfolio and in August of 2015 launched Smith Wealth Advisors with the goal of guiding his clients towards achieving their financial goals and ultimately, living the future they intended.

Today, Smith Wealth Advisors, located in West Lake Hills, is an integral part of the vibrant Austin community, sponsoring the Austin Ball Players 9u and 10u baseball teams and is a multi-year sponsor of the Dell PGA Match Play Golf Tournament and Dell Make-A-Wish Golf Tournaments